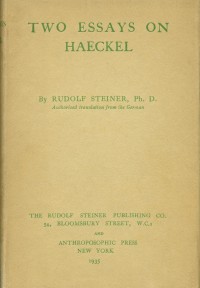 These two essays were written by Rudolf Steiner in 1900 and 1905, and are authorized translations from the German. The second essay was also given as a lecture on October 5th 1905 (from GA 54).

This translation of two of Dr. Steiner's works on Haeckel was originally published by the Theosophical Society in one volume with an essay on the Working of Karma. By the courtesy of the Theosophical Society and with the kind consent of the translator, Dr. Bertram Keightley, LL.D., M.A., the parts referring to Haeckel are now reprinted in this volume.