This is Rudolf Steiner's remarkable autobiography in which he traces his life through the forty-sixth year. Rather than focusing on the outer events, he describes the path of his soul development and the struggles he went through to develop his world view. The depth of insight and appreciation he shows for those around him gives an extraordinary warmth to this book and is matched by the clarity and objectivity he has concerning himself. This autobiography allows us a glimpse into the soul of one of the most significant figures of the 20th century.

The 38 short chapters of this autobiography originally appeared serially in German. Collected together, they form a coherent book of about 350 pages. 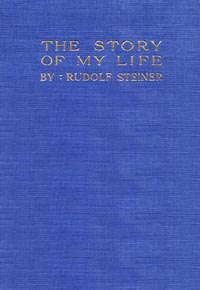 The unfinished autobiography of Rudolf Steiner, in which the context of his life with the emergence of anthroposophy is visible. Steiner describes himseld in his youth and as a student in Austria, the intensive study of the work and the way of looking Goethe, his publishing activity for Goethe's scientific work through which he is led to Weimar; immersion in the cultural time in Berlin during the turn of the century, and finally advocacy for the anthroposophical spiritual science. The work leads up to 1907, the 46th year in Steiner's life. His death (30 March 1925) prevented the conclusion of the presentations. With numerous illustrations and manuscript reproductions, as well as a detailed register of people and a chronicle of events.