Greek and Germanic Mythology in the Light of Esotericism
GA 92 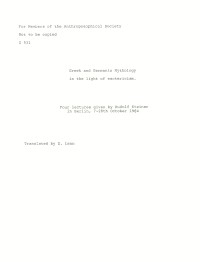 These four lectures, Cosmic History, Greek and German Mythology, are from the lecture series entitled, Occult Truths in Old Myths and Sagas, published in German as, Die Okkulten Wahrheiten Alter Mythen und Sagen. They were previously catalogued in the German edition that bears the title, Kosmische Geschichte. Esoterik in der Griechischen und Germanischen Mythologie (Volume 90f in the Bibliographic Survey, 1961). These lectures were originally a part of Bn/GA 92, but that was changed to Bn/GA 90f, and then back to Bn/GA 92 as of Jan 2003. Translated by Dorothy Lenn