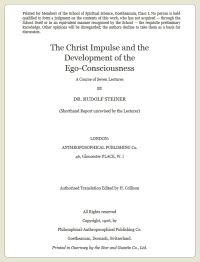 Printed for Members of the School of Spiritual Science, Goetheanum, Class I. No person is held qualified to form a judgment on the contents of this work, who has not acquired — through the School itself or in an equivalent manner recognised by the School — the requisite preliminary knowledge. Other opinions will be disregarded; the authors decline to take them as a basis for discussion.

This Course of Seven lectures, edited by Harry Collison, was given in Berlin from October 1909 to May 1910. The shorthand report it was translated from was unrevised by the Lecturer. The translator is unknown. In the collected edition of Rudolf Steiner's works, the volume containing the German texts is entitled: Der Christus-Impuls und die Entwicklung des Ich-Bewusstseins (vol. 116 in the Bibliographic Survey). Edited by Harry Collison