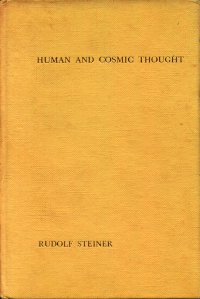 In these lectures Rudolf Steiner demonstrates that there are twelve main philosophical standpoints and that the fruitful progress in philosophy depends not upon defending one and refuting the others but in learning to experience the validity of them all. This not only sharpens and makes more flexible our own powers of thinking, but also overcomes a narrow-minded one-sidedness and promotes tolerance and understanding of other people and their opinions.

Translated from shorthand reports unrevised by the lecturer, from the 4th edition (1961) of the text published with the title, Das menschliche und kosmische Gedanke, in the Complete Edition of the works of Rudolf Steiner in the original German. (Volume No. 151 in the Bibliographical Survey, 1961.)

Here are four lectures given in Berlin from 20th to 23rd January, 1914 during the Second General Meeting of the Anthroposophical Society.