The Karma of Materialism
GA 176 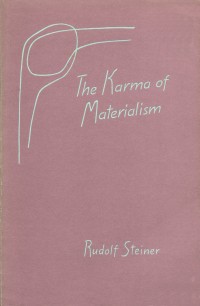 Addressing the rise of materialism as a world view, Steiner shows its consequences for human evolution. This volume along with Aspects of Human Evolution completes the entire German Volume GA 176. It includes a foreword by Owen Barfield.

These nine lectures, translated from the German by Rita Stebbing, were given in Berlin from July 31st to September 25th, 1917. In the collected edition of Rudolf Steiner's works, the volume containing the German texts is entitled: Menschliche und Menschheitliche Entwicklungswahrheiten. Das Karma den Materialismus