The Necessity for New Ways of Spiritual Knowledge
GA 192 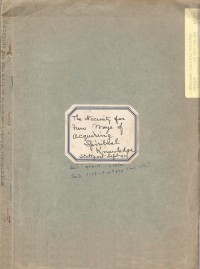 The two lectures were given by Rudolf Steiner in September of 1919 at Stuttgart. They are lectures 16 and 17 of 17 lectures in the lecture series entitled, Spiritual Science & Social & Educational Questions, and published in German as, Geisteswissenschaftliche Behandlung Socialer und Paedagogischer Fragen.