Spiritual Science as a Foundation for Social Forms
GA 199 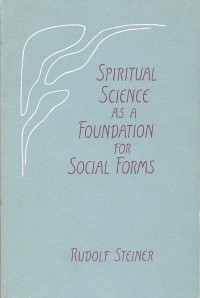 These are perhaps Steiner's most exciting lectures on the fundamentals of social renewal. Among the themes he considers are spiritual science as a knowledge of action; the twelve senses of the human being in their relation to Imagination, Inspiration, and Intuition; the science of initiation and the impulse for freedom; and viewpoints on the forming of healthy social judgments. This volume provides a wealth of inspiration showing that healing will come to social life when the inner mobility of soul acquired through spiritual science is allowed to mold new social forms.

The address and seventeen lectures presented here were given between August 6 and September 16, 1920 in Dornach, Switzerland, and on September 17 and 18, 1920 in Berlin. In the Collected edition of Rudolf Steiner's works, the volume containing the German texts is entitled, Geisteswissenschaft als Erkenntnis der Grundimpulse Sozialer Gestaltung (Vol. 199 in the Bibliographic Survey). They were translated from the German by Maria St. Goar and edited by Alan Howard.

The Cover Graphic form is by Rudolf Steiner. The Title lettering is by Peter Stebbing.