Man — Hieroglyph of the Universe
GA 201 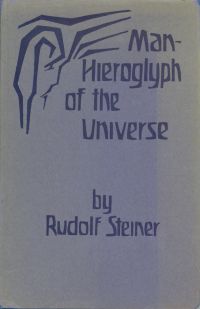 What is the principal secret of the universe?

The ancient mystery saying called on the human being to ‘Know Yourself!’ Rudolf Steiner explains that this maxim is not asking us to study subjectively our own personal character, but rather to come to a knowledge of our true, archetypal human nature — and with it the position we occupy in the universe.

In these eloquent lectures, Rudolf Steiner speaks of the human being as the model of creation, the primary focus of the cosmos. In an extensive exposition he talks of the constellation of cosmic forces, zodiac and planets amongst which we find ourselves situated. Only a true knowledge of our human nature and the spiritual forces which surround us — the microcosm within the greater macrocosm — can enable humanity to progress, he says. This book is an important contribution to that goal: the development of a contemporary spiritual science of the human being.

Translated from shorthand reports unrevised by the lecturer. In the Complete Edition of the works of Rudolf Steiner the original German text is published with the title: Entsprechungen zwischen Mikrokosmos und Makrokosmos. Der Mensch — eine Hieroglyphe des Weltenalls.