Cosmic Christianity and the Impulse of Michael
GA 240 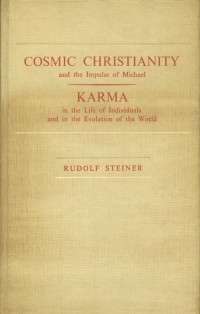 First printed in English in 1953 with the title, Cosmic Christianity and the Impulse of Michael. Karma in the Life of Individuals and the Evolution of the World. Six lectures given at Torquay and London, England, between 12th and 27th August, 1924. Published here with the kind permission of the Rudolf Steiner Nachlassverwaltung, Dornach, Switzerland.

Translated from shorthand reports unrevised by the lecturer by D. S. Osmond. The original texts of the lectures are contained in Vol. VIII of the series entitled Esoterische Betrachtungen karmischer Zusammenhänge