On The Art of Lecturing
GA 339 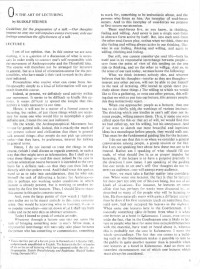 The six lectures presented here were given in Dornach, Switzerland from the 11th to the 16th of October, 1921. These lectures formed the Swiss Orientation Course, also known as, the Speakers' Course. In the Collected Edition of Rudolf Steiner's works, the volume containing the German texts is entitled, Anthroposophie, soziale Dreigliederung und Redenkunst. Orientierungskurs fuer die oeffentliche Wirksamkeit mit besonderem Himblick auf die Schweitz (Vol. 339 in the Bibliographic Survey, 1961). They were translated from the German by Maria St. Goar. Lecture three was translated by Peter Stebbing, and lecture six by Beverly Smith and Fred Paddock.

Originally published in English, in the Anthroposophical Newsletter. There were nine installments from Autumn 1976 to Winter 1978. Translated by Maria St. Goar, Peter Stebbing, Beverly Smith and Fred Paddock