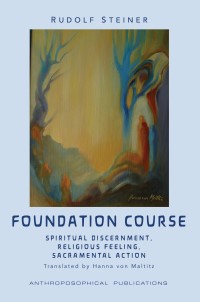 A course of 15 lectures and discussions given in Dornach, Switzerland in 1921. In this course, in which more than one hundred people interested in the questions of a renewal of religious life and work participated, Rudolf Steiner talks about the ways in which religious activity can be fertilized through spiritual knowledge and brought into new forms of worship. The “Documentary Supplements” included in the separate German edition containing reproductions of blackboard drawings and addresses, notebook entries, etc., is included in this English translation by Hanna von Maltiz.

Translator's Note: The lectures which follow, beginning with the sixteenth in the series, indicate that all participants in this lecture course were asked to sign an agreement that in the future, from that day onward, to only transmit the material presented to them from that point on, in a verbal form. These next lectures enter into all the details required of priests when performing the sacraments, with the wording, gestures and so on. For this reason, I will refrain from translating this material. It will remain available for those wanting to approach ordination into The Christian Community, in the oral tradition.