Course for Priests of the Christian Community
GA 345 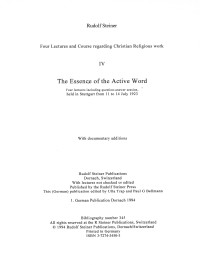 The first part of this volume contains four lectures which Rudolf Steiner gave to the priests of the “Christian community,” founded ten months earlier, in Stuttgart. In the second part are the original manuscripts, handwritten by Rudolf Steiner. These are supplements to what had already been given during the second and third lecture courses. They are consecrations for the Festivals of the Year and other rites.

These four lectures, comprising the entire GA 345, are from the lecture series entitled, Lectures at a Meeting of the Priests in Stuttgart, published in German as, Vom Wesen des winkenden Wortes. They have never before been translated into English: a First Edition. Translated by Hanna von Maltitz