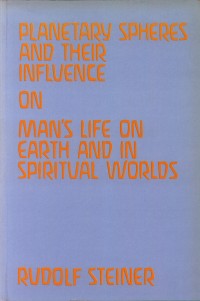 In these lectures, Rudolf Steiner describes the after-death states and the experiences we undergo, the influences of Ahrimanic Beings, man's spiritual connections with the planetary powers, and the preparations for re-incarnation. In death we learn the significance and meaning of death on earth, and this enlightening book reveals with clarity and vision something of the vastness of our earthly and cosmic existences.

Formerly published privately for members. Translated from the German by George and Mary Adams.