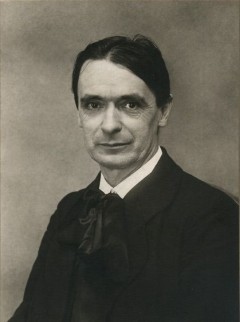 Rudolf Steiner was born in 1861 and died in 1925. In his autobiography, The Course of My Life 1 Published in parts from 1923–5, and never completed. The titles given for Dr. Steiner's books are those of the English translations. Read the 1928 edition titled The Story of My Life. he makes quite clear that the problems dealt with in The Philosophy of Freedom played a leading part in his life.

His childhood was spent in the Austrian countryside, where his father was a stationmaster. At the age of eight Steiner was already aware of things and beings that are not seen as well as those that are. Writing about his experiences at this age, he said, “... the reality of the spiritual world was as certain to me as that of the physical. I felt the need, however, for a sort of justification for this assumption.”

Recognizing the boy's ability, his father sent him to the Realschule at Wiener Neustadt, and later to the Technical University in Vienna. Here Steiner had to support himself, by means of scholarships and tutoring. Studying and mastering many more subjects than were in his curriculum, he always came back to the problem of knowledge itself. He was very much aware: that in the experience of oneself as an ego, one is in the world of the spirit. Although he took part in all the social activities going on around him — in the arts, the sciences, even in politics — he wrote that “much more vital at that time was the need to find an answer to the question: How far is it possible to prove that in human thinking real spirit is the agent?”

He made a deep study of philosophy, particularly the writings of Kant, but nowhere did he find a way of thinking that could be carried as far as a perception of the spiritual world. Thus Steiner was led to develop a theory of knowledge out of his own striving after truth, one which took its start from a direct experience of the spiritual nature of thinking.

As a student, Steiner's scientific ability was acknowledged when he was asked to edit Goethe's writings on nature. In Goethe he recognized one who had been able to perceive the spiritual in nature, even though he had not carried this as far as a direct perception of the spirit. Steiner was able to bring a new understanding to Goethe's scientific work through this insight into his perception of nature. Since no existing philosophical theory could take this kind of vision into account, and since Goethe had never stated explicitly what his philosophy of life was, Steiner filled this need by publishing, in 1886, an introductory book called The Theory of Knowledge Implicit in Goethes World Conception His introductions to the several volumes and sections of Goethe's scientific writings (1883–97) have been collected into the book Goethe the Scientist. These are valuable contributions to the philosophy of science.

During this time his thoughts about his own philosophy were gradually coming to maturity. In the year 1888 he met Eduard von Hartmann, with whom he had already had a long correspondence. He describes the chilling effect on him of the way this philosopher of pessimism denied that thinking could ever reach reality, but must forever deal with illusions. Steiner was already clear in his mind how such obstacles were to be overcome. He did not stop at the problem of knowledge, but carried his ideas from this realm into the field of ethics, to help him deal with the problem of human freedom. He wanted to show that morality could be given a sure foundation without basing it upon imposed rules of conduct.

Meanwhile his work of editing had taken him away from his beloved Vienna to Weimar. Here Steiner wrestled with the task of presenting his ideas to the world. His observations of the spiritual had all the exactness of a science, and yet his experience of the reality of ideas was in some ways akin to the mystic's experience. Mysticism presents the intensity of immediate knowledge with conviction, but deals only with subjective impressions; it fails to deal with the reality outside man. Science, on the other hand, consists of ideas about the world, even if the ideas are mainly materialistic. By starting from the spiritual nature of thinking, Steiner was able to form ideas that bear upon the spiritual world in the same way that the ideas of natural science bear upon the physical. Thus he could describe his philosophy as the result of “introspective observation following the methods of Natural Science.” He first presented an outline of his ideas in his doctoral dissertation, Truth and Knowledge, which bore the sub-title “Prelude to a ‘Philosophy of Freedom’.”

In 1894 The Philosophy of Freedom was published, and the content which had formed the centre of his life's striving was placed before the world. Steiner was deeply disappointed at the lack of understanding it received. Hartmann's reaction was typical; instead of accepting the discovery that thinking can lead to the reality of the spirit in the world, he continued to think that "spirit" was merely a concept existing in the human mind, and freedom an illusion based on ignorance. Such was fundamentally the view of the age to which Steiner introduced his philosophy. But however it seemed to others, Steiner had in fact established a firm foundation for knowledge of the spirit, and now he felt able to pursue his researches in this field without restraint. The The Philosophy of Freedom summed up the ideas he had formed to deal with the riddles of existence that had so far dominated his life. “The further way,” he wrote, “could now be nothing else but a struggle to find the right form of ideas to express the spiritual world itself.”

While still at Weimar, Steiner wrote two more books, Friedrich Nietzsche, Fighter for Freedom, inspired by a visit to the aged philosopher, and Goethe's Conception of the World (1897), which completed his work in this field. He then moved to Berlin to take over the editing of a literary magazine; here he wrote Riddles of Philosophy (1901) and Mysticism and Modern Thought (1901). He also embarked on an ever-increasing activity of lecturing. But his real task lay in deepening his knowledge of the spiritual world until he could reach the point of publishing the results of this research.

The rest of his life was devoted to building up a complete science of the spirit, to which he gave the name Anthroposophy. Foremost amongst his discoveries was his direct experience of the reality of the Christ, which soon took a central place in his whole teaching. The many books and lectures which he published set forth the magnificent scope of his vision. 2The list of titles is long, but the more important books include: Christianity as Mystical Fact (1902), Knowledge of the Higher Worlds and its Attainment (1904), Theosophy, a description of the nature of man and his relation to the spiritual world (1904), and Occult Science — an Outline, an account of the evolution of man and the universe in terms of spiritual realities (1910). From 1911 he turned also to the arts — drama, painting, architecture, eurythmy — showing the creative forming powers that can be drawn from spiritual vision. As a response to the disaster of the 1914–18 war, he showed how the social sphere could be given new life through an insight into the nature of man, his initiative bearing practical fruit in the fields of education, agriculture, therapy and medicine. After a few more years of intense activity, now as the leader of a world-wide movement, he died, leaving behind him an achievement that must allow his recognition as the first Initiate of the age of science. 3For an account of the life and work of Rudolf Steiner, see A Scientist of The Invisible, by A. P. Shepherd (1954). The range of his contribution to modern thought can be seen in The Faithful Thinker, edited by A. C. Harwood (1961). Anthroposophy is itself a science, firmly based on the results of observation, and open to investigation by anyone who is prepared to follow the path of development he pioneered — a path that takes its start from the struggle for inner freedom set forth in this book.

Michael Wilson, Clent, 1964.
From the introduction to The Philosophy of Freedom

See here for a list of biographies in our database.