A Time of Testing and Preparation 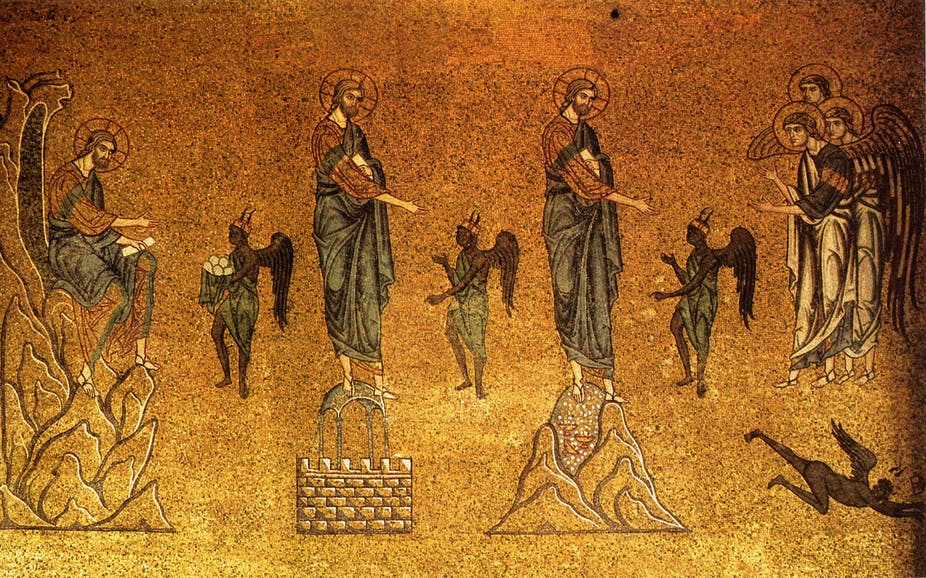 The Christian season of Lent is the 40 days before Easter. It is a time when Christians contemplate Christ Jesus fasting in the wilderness for 40 days and facing worldly temptations. Rudolf Steiner teaches it was necessary for Jesus to retreat into the wilderness after his baptism to fully develop his super-sensible abilities. Observance of this season is a wonderful time to follow the example of Christ Jesus by fasting and preparing both physically and spiritually for what lies ahead.

Fasting brings harmony between the universe and man.

Ash Wednesday marks the beginning of Lent. At this time, many people give up indulgences and some fast in remembrance of Jesus Christ fasting in the desert for 40 days. Steiner recommended fasting to counteract the destructive forces of the world:

Alcohol as an evil counterforce

Powerful forces of evil work against human spiritual evolution. Mardi Gras or “Fat Tuesday” exemplifies this. People are tempted to gluttony, debauchery and drunkenness the day before the beginning of Lent. What they don’t understand, however, is the enormously detrimental effect alcohol has on human health and well-being today. Steiner says:

[N]ow all civilized people have reached that stage so that alcohol is an unnecessary evil today. Through its use one loses the ability to get along with others and to understand them. Alcohol is especially harmful for esoterics since its use changes all developed higher forces into forces of the personal ego, repeatedly locks it into itself, and tears the astral body apart through the opposing streams of the higher and lower I forces. The principle through which everyone can consciously attain his individualization was brought through the coming of Christ to the earth. That's why Christ Jesus says: I am the true vine.

By consuming alcohol one prepares a fertile soil for hosts of spiritual beings, just as a dirty room gets filled with flies.

A time to develop clear vision

Why did Jesus need to retreat in meditation after his baptism? Steiner points out he still needed to develop his capability to express the Christ within him, as do we.

After Jesus of Nazareth took the Christ-being into himself he had to go into the wilderness. There he had clairvoyant visions, which are described fairly accurately by the words of the clairvoyant Gospel writers. It could also be said that now the Christ-being was really bound to the three bodies of Jesus. That means that he descended from the spiritual world and became limited to the capacities of the three bodies. Therefore it would be false to think that Christ, because he belonged to a higher world from which he had descended, could now immediately envision that higher world. That is not the case. Whoever finds this incomprehensible should think again about what it means to be clairvoyant. You are all clairvoyant! All! There is not one here who is not clairvoyant. So why don't you all see clairvoyantly? Because you haven't developed the organs in order to use the forces which reside in all humans. It is not a question of having the capacities, but rather of being able to use them.

During the 40 days Jesus spent fasting in the desert, he was tempted three times:

At that moment he sensed what that being was attempting in the language of visions — what the Bible describes with the words: '𝐀𝐥𝐥 𝐭𝐡𝐞 𝐤𝐢𝐧𝐠𝐝𝐨𝐦𝐬 𝐲𝐨𝐮 𝐬𝐞𝐞 𝐛𝐞𝐟𝐨𝐫𝐞 𝐲𝐨𝐮' — 𝐤𝐢𝐧𝐠𝐝𝐨𝐦𝐬 𝐨𝐟 𝐭𝐡𝐞 𝐬𝐩𝐢𝐫𝐢𝐭𝐮𝐚𝐥 𝐰𝐨𝐫𝐥𝐝 — '𝐜𝐚𝐧 𝐛𝐞 𝐲𝐨𝐮𝐫𝐬 𝐢𝐟 𝐲𝐨𝐮 𝐫𝐞𝐜𝐨𝐠𝐧𝐢𝐳𝐞 𝐦𝐞 𝐚𝐬 𝐭𝐡𝐞 𝐥𝐨𝐫𝐝 𝐨𝐟 𝐭𝐡𝐢𝐬 𝐰𝐨𝐫𝐥𝐝.' If one is full of pride and arrogance and brings it into the spiritual world, one can own this world's kingdom of Lucifer because arrogance submerges everything else if everything except arrogance is left behind. [...]Then he recognized that figure as the one he had seen at the gates of the Essenes: Lucifer! Therefore he knew that now Lucifer was speaking to him, and he repulsed the attack. 𝐇𝐞 𝐝𝐞𝐟𝐞𝐚𝐭𝐞𝐝 𝐋𝐮𝐜𝐢𝐟𝐞𝐫."

Then two beings came to attack him, and he had the impression which was more or less what the Bible describes. They said to him: '𝐒𝐡𝐨𝐰 𝐚𝐥𝐥 𝐲𝐨𝐮𝐫 𝐟𝐞𝐚𝐫𝐥𝐞𝐬𝐬𝐧𝐞𝐬𝐬, 𝐲𝐨𝐮𝐫 𝐬𝐭𝐫𝐞𝐧𝐠𝐭𝐡, 𝐬𝐡𝐨𝐰 𝐰𝐡𝐚𝐭 𝐲𝐨𝐮 𝐜𝐚𝐧 𝐝𝐨 𝐚𝐬 𝐚 𝐦𝐚𝐧 𝐛𝐲 𝐭𝐡𝐫𝐨𝐰𝐢𝐧𝐠 𝐲𝐨𝐮𝐫𝐬𝐞𝐥𝐟 𝐟𝐫𝐨𝐦 𝐭𝐡𝐞 𝐡𝐞𝐢𝐠𝐡𝐭𝐬 𝐚𝐧𝐝 𝐧𝐨𝐭 𝐟𝐞𝐚𝐫 𝐛𝐞𝐢𝐧𝐠 𝐢𝐧𝐣𝐮𝐫𝐞𝐝.' In such a case consciousness of strength and courage should awaken in the human soul, but it can also make him a sensualist. Two figures stood before him. Because Jesus had had the impression that it was Lucifer and Ahriman who had flown away from the Essene gates, he now had the impression that within one of them was the same being whom the leper had encountered and who had presented himself as death. Because of these experiences he recognized Lucifer and Ahriman. […] He also repulsed this attack. 𝐇𝐞 𝐝𝐞𝐟𝐞𝐚𝐭𝐞𝐝 𝐛𝐨𝐭𝐡 𝐋𝐮𝐜𝐢𝐟𝐞𝐫 𝐚𝐧𝐝 𝐀𝐡𝐫𝐢𝐦𝐚𝐧."

Then Ahriman came again. A kind of temptation ensued. He said to Christ Jesus something similar to what the Bible describes: '𝐌𝐚𝐤𝐞 𝐭𝐡𝐞𝐬𝐞 𝐬𝐭𝐨𝐧𝐞𝐬 𝐢𝐧𝐭𝐨 𝐛𝐫𝐞𝐚𝐝 𝐭𝐨 𝐬𝐡𝐨𝐰 𝐲𝐨𝐮𝐫 𝐩𝐨𝐰𝐞𝐫.' But now Jesus could not give a complete answer to what Ahriman demanded. […] If Christ was to help earthly humanity in the right way, he had to allow Ahriman to act. 𝐀𝐡𝐫𝐢𝐦𝐚𝐧, 𝐭𝐡𝐞 𝐦𝐚𝐭𝐞𝐫𝐢𝐚𝐥, 𝐦𝐮𝐬𝐭 𝐛𝐞 𝐚𝐜𝐭𝐢𝐯𝐞 𝐮𝐧𝐭𝐢𝐥 𝐭𝐡𝐞 𝐞𝐧𝐝 𝐨𝐟 𝐭𝐡𝐞 𝐞𝐚𝐫𝐭𝐡'𝐬 𝐞𝐯𝐨𝐥𝐮𝐭𝐢𝐨𝐧. His work had to remain undefeated by Christ, not completely overcome. The Christ must accept the struggle with Ahriman until the end of earth evolution. Ahriman had to remain.

We as humans can overcome the attacks of Lucifer and the attacks of Lucifer and Ahriman together. 𝐓𝐡𝐞 𝐬𝐭𝐫𝐮𝐠𝐠𝐥𝐞 𝐢𝐧 𝐭𝐡𝐞 𝐦𝐚𝐭𝐞𝐫𝐢𝐚𝐥 𝐨𝐮𝐭𝐞𝐫 𝐰𝐨𝐫𝐥𝐝 𝐦𝐮𝐬𝐭 𝐛𝐞 𝐟𝐨𝐮𝐠𝐡𝐭 𝐨𝐮𝐭 𝐮𝐧𝐭𝐢𝐥 𝐭𝐡𝐞 𝐞𝐧𝐝 𝐨𝐟 𝐭𝐡𝐞 𝐞𝐚𝐫𝐭𝐡'𝐬 𝐞𝐯𝐨𝐥𝐮𝐭𝐢𝐨𝐧. Therefore, Christ had to hold Ahriman in check, but allow him to stand alongside him. For this reason, Ahriman remained active during the three years that Christ worked in the body of Jesus of Nazareth, and he entered the soul of Judas and was decisive in the betrayal of Jesus. What happened through Judas is related to the temptation in the desert after the baptism in the Jordan.”

We too must continue to struggle against Ahrimanic forces until the end of earth’s evolution. Lent is an opportunity to practice and prepare for our own earthly challenges. With these teachings in mind, let us progress through Lent to the celebration of the ultimate sacrifice and salvation of humanity—the Mystery of Golgotha.